Hello again, fellow statistics-enthusiasts. After investigating all kinds of running it down going on in Division 3 last week, we set our sights on Championship territory for the first time, as we visit Division 2 to bring you the latest Lounge meta snapshot. In case you missed an edition of the Cup divisions, you can always read up on it here. To remind you again, all these numbers and pie charts are coming from all the Lounge games played up to week 6. The first thing to note about Division 2 is some professional slothalism going on. I’ve not come across a division where more games resulted in free wins. Is there some form of rigging happening? Hang in there, we’ll find out! 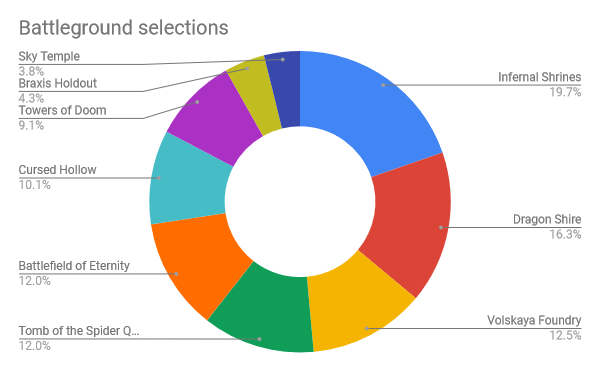 In terms of battlegrounds, we actually have the most balanced pie chart we’ve seen in this category so far. Infernal Shrines is the top played map with 41 selections across 208 games, however that’s less total picks than we’ve seen for Div 3 up to week 5. Dragon Shire (34) is the somewhat unexpected runner-up, followed by Volskaya Foundry (26) and slew of other battlegrounds with roughly the same number of selections (Tomb 25, BoE 25, Cursed Hollow 21 and Towers of Doom 19). Only Braxis and Sky Temple are shunned by the Div 2 teams with 9 and 8 selections so far throughout the season, respectively.

One thing we’ve looked at in detail last week was the win rate for the team that wins the first objective. For Div 2, it seems comebacks are a lot more common, as only 59.1% of games were won by the team that took the first objective. The most snowbally battlegrounds based on that number would then be Cursed Hollow (85.7%), Dragon Shire (73.5%), and your friendly neighborhood robot factory owned by Volskaya Industries (73.1%).

The outlier map in terms of first-pick win rate is also Cursed Hollow, where first-pick teams have only taken the game in 33.3% of cases.

If your team is superstitious (and no, by that I don’t mean that they are Nazeebo pickers necesssarily, although it actually fits the map pretty well), you might want to consider Tomb of the Spider Queen if you’re on the red side (64% WR) or Infernal Shrines if your team is on the blue side of things (58.5% WR). As the total number of games rise, one would expect these things to be fairly balanced out, so I wonder whether these outliers actually have some significance or not. I wonder who it is that decides which side of a matchup your team gets…? #Robbgate, anyone? In terms of hero bans, we have the same three heroes on top of the “We hate you, please stay out of our games”-leaderboard as we’ve had last week in Div 3. Genji takes the crown with 147 bans once more, followed by Yrel (113) and Raynor (104). I still wonder if the more "niche" roles like tank and support are going to see an increased number of bans, but for now it seems even Jimmy is sitting steady in his third place with his closest competitor Diablo well below him. On the side of hero picks, we do have a new leader, however. Storytelling his way to the top is Deckard Cain, which is, thinking about hero priorities in HGC and Open Division, not too big of a surprise. And along with Deckard’s 119 selections in 208 games, I'll give you the entire support category first in the analysis. Malfurion is the second-most popular support with 81 selections, followed by Rehgar with 66 picks in third spot.

In terms of win rate rankings, we’re again looking at heroes that have been picked more than 20 times overall. Not as a huge surprise, Deckard leads this category with his 56.3% win rate as well, with considerably fewer players in Div 2 going for the non-meta picks such as Ana (5W-1L), Li Li (4W-0L), or Lucio (3W-1L). Uther is another hero that’s doing quite well (9W-5L) but doesn’t quite make the cut. Malfurion (53.1% WR) takes the second spot on the ladder, making both highest-picked supports also the win rate leaders as well as the only supports with an overall positive win ratio. Rehgar, despite his pick popularity, sits at 37.9% win rate, making him a rather questionable pick. Still the most popular tank by far is our jumpy dwarf Muradin with 96 picks, however there has been a bit of an upset in the tank category as well. Diablo (87 selections) narrowly beats Johanna (86) due to his recent spike in popularity, however we’ve now seen the same 3 tanks mentioned all the way from down in Div 5.

When we look at the win rates, there’s a bit of a surprise. Stitches seems to be especially hungry for Div 2 wins, sitting at a solid 68% win rate. Muradin takes second place with 56.3%, and Johanna narrowly beats out Diablo (for now) with 53.5% win rate. Is it finally time for goat facts? It obviously is, as Div 2 has managed to make Yrel their most-picked solo laner with 77 picks, followed by the usual candidates Blaze (68) and Dehaka (66).

Life expectancy for goats is between fifteen and eighteen years. An instance of a goat reaching the age of 24 has been reported.

We shall call that one Deckard Goat.

I wish I could say Rexxar (1W-0L) was your highest win rate solo laner, but unfortunately that’s not quite how it works. However, how do you feel about Artanis, who narrowly makes the top spot with 67% win rate over 21 games, clearly carried by his 6 games meme-beaming away at his enemies (5W-1L). Thrall is also not a very common guest in this list, but takes second place with a 56.9% win rate over 51 games. Sonya beats out all of the most-picked solo laners with 56.1% to close out the list. 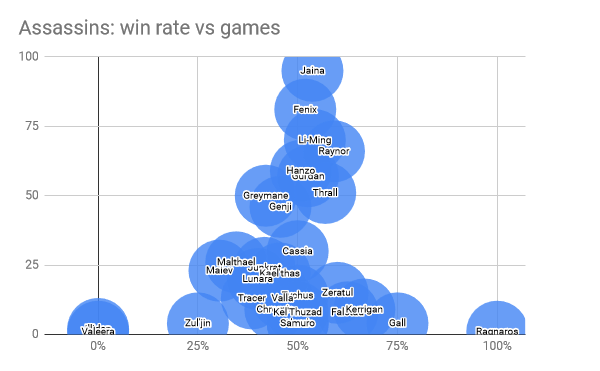 Jaina makes a return to the overall podium as the most-picked assassin with 95 selections. Fenix (81) and Li-Ming (70), whom we haven’t heard of all season, are both ahead of Jimmy Raynor in terms of total number of picks, yet our space marshal’s 81.7% overall draft involvement (picks and bans) is only beaten by Genji and Yrel.

In terms of win rate, Raynor justifies his large number of bans, as he leads all assassins and specialists with more than 20 games played with 59.1%. Div 2 seems to have figured the meta out quite well, as both Li-Ming and Jaina from the highest picked-list follow Jimmy in terms of win rate with 54.3% and 53.7%, respectively. In terms of specialists, only Azmodan (50% WR) manages to trample over the 20 games-hurdle, and with 71 bans he sits at 44.7% popularity, which approximately mirrors the numbers from Div 3. 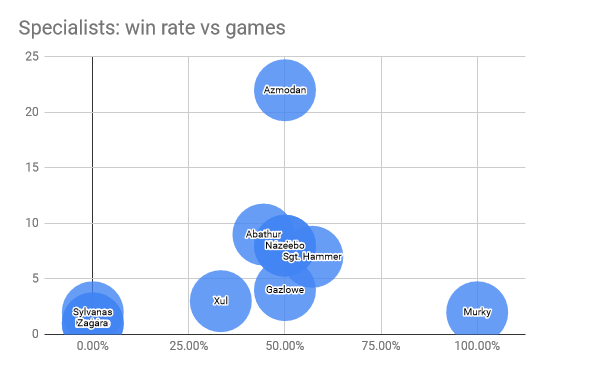 Div 2 teams may be professional sloths when it comes to actually playing their games, but they certainly are no slouches when it comes to draft diversity. As we’re still looking at games Whitemane was banned for, 76 out of the 80 allowed heroes have been picked at some point by our Div 2 teams.

The as-of-yet unpicked heroes are Chen, Nova, the Butcher and the Vikings. So if you’re looking for some advice on how to pull off a Probius game in the Lounge, look no further. Ask Aden from Die Kupschies! On the more serious side, the standard W-W-A-A-S comp is not quite as popular in Div 2 (66.8% popularity), but fairly successful (52.5% win rate). Replacing the offlane bruiser with a slightly squishier assassin or replacing one of the assassins with any of the available specialists is slightly less successful, as both comps are below even in terms of win rate. Having seen that triple and quadruple support comps are being played in Div 2, does it even make sense to look at conservative double support? Probably not, as its win rate is just over 30% in the 13 games of double “dedicated” support. This is traditionally where I say that heroes like Abathur (4W-5L), Medivh (4W-4L) and Zarya (2W-2L) are not part of this double support stat courtesy of Blizzard's role system. 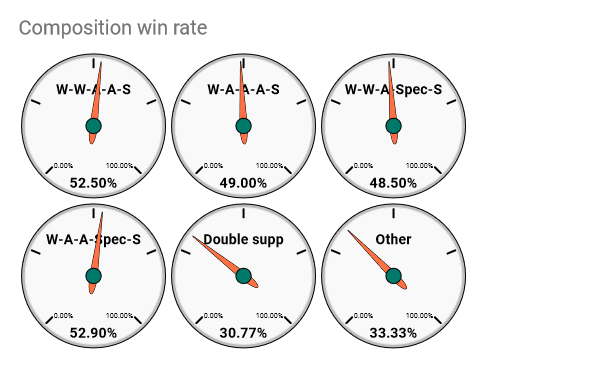 Moving on, I have some awards for you. And because I can, all the relevant numbers are in units of level 1 Murky healthbars. Murky by the way has a 2W-0L record so far in Div 2.

One thing you always get to hear about higher level play is that players are much more efficient in order to find some advantage for their team. Let’s look at a few efficiency stats and see who’s ahead of the curve in Div 2.

Hidde of Snipe City is not only a regular guest and resident HGC expert on Talking Up a Storm, the Heroes Lounge Podcast, but also leads Div 2 in terms of efficiently soaking XP, netting an average of 18.6k over 14 games. No, those are not Murky health bars, but we’ll get there soon, I promise.

Dying is widely considered as the most inefficient play you can possibly make in HotS (unless you are Murky), therefore it doesn’t come as a surprise that team 25cm’s Pyn1sh3r sports a 100% win rate with a 0.3 death per game average. That’s 1.2 Murky deaths by the way, but in terms of time dead, it’s only 7s per game. I wish my average HL twin blades Varian would play like that. Or even my first-pick Murky.

Efficient tanking is hard to quantify in terms of stats, but Minsc of Suplex eSports (don’t show that team name spelling to Redeye!) is the player with the most damage taken per death at 56.7k on average. That’s 74.7 level 1 Murky health bars.

In terms of healing per minute, we have another Snipe City player topping the charts. Oment leads Div 2 with 4.5k healing per minute on average despite spending most of his practice time bringing us casts from around the Lounge. With this kind of healing output, he could easily sustain a school/flock/herd/colony/brood/assembly of almost 6 lvl 1 Murkys.

Better get your SlothThumps ready for the next (and last) stat, because SirKraider of aptly named Deadly Penguin Squad (that’s assuming they are in fact a penguin) has put out a total damage number of 882k over 14 games. That’s a total of 1162 lvl 1 Murkys on their conscience, or 4 Murkys per minute played.

And with that we're done for the week. No Murkys were harmed in the making of this blog post. Thanks for reading and I hope you enjoyed. As always, if you're interested in the raw data, you can always contact me or check some of it in the spreadsheet version for this week.

Credits go to  ebshimizu and his amazing HotS replay analysis and database software Stats of the Storm, without which this analysis would not have been possible. Credits to wikipedia for easily accessible goat facts, as well. If you have any questions, comments or criticism, you can reach me on Discord as Llarion#0127!

Talking up a Storm - Episode 3

Sep 06, 2018 Talking up a Storm
Join as Narsha and Hidde discuss everything from the last week of exciting HGC action!

Sep 07, 2018 Learning With Lounge
The fourth episode of the educational series between our Heartless and CavalierGuest with MichaelUdall as a guest. Between the three of them ...