This is a "TransparentTV" event, and is hosted on the Heroes Lounge website and discord, but not organised by Heroes Lounge.

The event is heavily inspired by the "X-cup" and I am thankful for all those involved in that cup, and the cups that have come before it. This ruleset has a lot of adaptations from other tournament rulesets, so thanks to CrossAlbeo and HeroesLounge for their work on their rulesets.

The name is merely meant as a bad joke.

We expect all participants to treat every player or staff member with a high level of respect both ingame and out of game during the tournament. If staff think a player is being disrespectful, punishments can range from qualifying points being removed from a team, to disqualification in this event, and future events.

There is a guaranteed prize for the first team of 5 egg cups.

If a cash prize is awarded,  It will be broken down into the following percentages.

The following map are the map pool :

Use the bot on the discord to do the map ban/pick.

For Bo1 and Bo3, there will be 2 maps banned per team.

A game is over when and only when a core health is reduced to 0.

Qualifiers will start at 18:00 CET Wednesdays.

They will be single elimination bracket of Bo1 matches, Semi-finals and finals will be best of 3.

Qualifier Dates are as follows:

Points in the qualifiers will be as follows.

If teams are tied by the number of points, ties will be broken by the following

If there are still tied teams after both these conditions, a coin flip or equivalent game of chance will break the tie.

The Date for the playoffs is Sunday 19th December, starting at 13:00 CET. 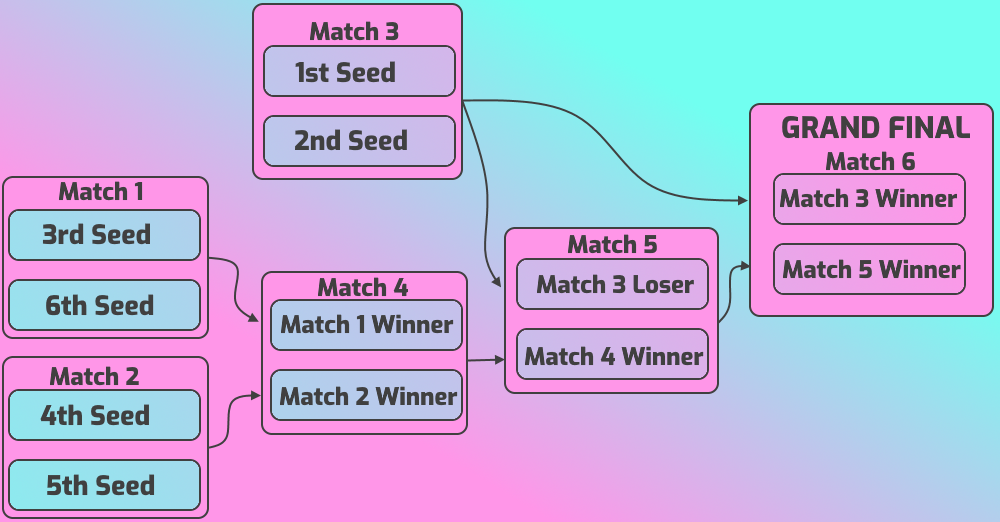 The Eggs Cup is a worldwide tournament. A team's roster  is composed of 5 up to 6 players. Players cannot be part of multiple teams.

All matches will be played on EU servers except if both teams agree on playing on a different server.

A team must designate one captain, who will be the only point of contact responsible for communications. This captain is not required to be an eligible participant but can’t be part of multiple teams.

Eggs Cup’s staff reserves the right to refuse any player.

A team should be created using the Heroes Lounge website.

If at the point of sign up for their first qualifier they have more than 6 players on the website, a team will be required to register which players they intend to use in the tournament.

A team can only have five (5) active players at once.

During the qualifiers, a team can have a sixth player, substitute, who can be switched when needed.

During the playoff, team can have an additional player for a round if an emergency arrives and they already have a sub playing.

Team and player names must be approved by Eggs Cups staff. The staff reserve the right to ask players to change team or player names. Failure to comply will result in forfeiture of play.

Team captain must create a Heroes Lounge account and give all information necessary to register (Captain’s Blizzard ID and Discord ID).

Team captains must join the Heroes Lounge Discord where they can be easily contacted: https://discord.com/invite/aePkBsZ . They will be required to use the discord to draft the maps.

Discord can be used as a website app or a standalone software- https://discordapp.com

The tournament will follow Heroes lounge banned bugs and cosmetics list, which can be found at https://heroeslounge.gg/general/ruleset.

Eggs Cup’s staff may override some of those rules.

Pauses may only be started for technical difficulties.

The time pool for pauses per map is 10 minutes, after which the game will resume.

Teams participating in Eggs Cup are prohibited from using known bugs or exploits, doing so will result in the loss of the match and continued abuse will result in expulsion from the tournament.

Feedback from the teams will be respected and will be used to uphold competitive integrity.

Bugs or exploits not shown on the ban list can still be declared known by the Eggs Cup’s staff. Use of said bugs or exploits to create unfair matches will be followed with disciplinary action.

Any form of cheating will not be tolerated, and punishment will be at the discretion of Eggs Cup’s staff, this includes collusion, match fixing, attempts to interfere with other teams connection, tampering with the operation of the tournament, account sharing and other forms of cheating.

A team will be considered tardy, if the team has not assembled 5 minutes after the agreed upon time. The team will receive a warning.

A team that is tardy for 10 minutes forfeits a match.

A maximum break of 5 minutes between maps is allowed before a team becomes tardy.

A maximum break of 10 minutes between rounds is allowed before a team becomes tardy.

Teams must keep replays up to 15 days after the matches. Replays should be uploaded to the Heroes Lounge website after each game. See the captain's guide for how to do this.

Results and replays for 3rd place play offs must be sent to an administrator.

Players can stream their PoV.
Casters can freely join the lobbies if there is a free spot. If no spots are available, higher viewer caster are prioritised, with the highest priority going to TransparentTV and/or co-casters.

Everyone must use a 20s delay.