Lady-sloths and Gentlesloths, welcome back to the second edition of Lounge Meta Snapshot. To give a short summary, we’re looking at the stats of battlegrounds, heroes and players involved in the lounge to give a concise summary of the meta of the season so far. If you missed the Division 5 write-up, you can find it here. This time around, we’ll be climbing up towards Division 4, which gives us the chance to compare the meta and highlight the notable differences a bit. Furthermore, as this time we’re able to include data up to week 4, we have newly reworked Chromie and Stukov stats involved in the analysis, although Whitemane still has some time on the sidelines until she’s able to get involved in the action during week 7. Get ready for spreadsheets and pie charts version 2, this time with significantly less Chromie bans! Possibly? Maybe?! Who knows, let’s wait and see…! 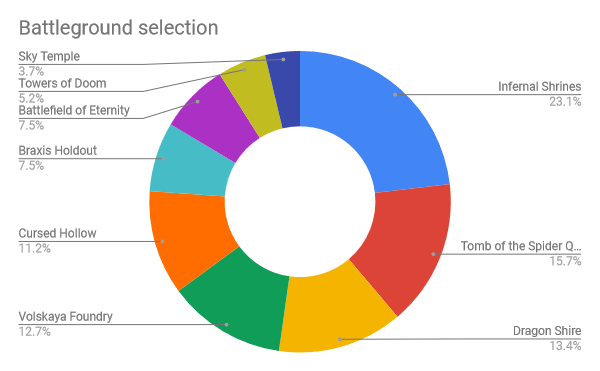 To state the obvious facts first, everyone’s favourite well-rounded Infernal Shrines tops the battleground charts in Div 4 just as it did in Div 5 with 31 selections in a total of 134 games. Hopefully nobody is falling out of their chairs just yet. Following behind the two time winner of the Lounge’s most popular battleground award, we have Tomb of the Spider Queen with similar popularity compared to Div 5 (21) and newcomer Dragon Shire (18). On the bottom of the charts we find Sky Temple with just 5 games played so far. However, if you’re now thinking about cheesing your next opponent with a Sky Temple pick, be aware that all of these 5 games have been won by the first-pick team, probably only furthering the hesitation of Div 4 teams in visiting Luxoria.

In terms of game length, we’re looking at very similar numbers compared to Div 5. The shortest match was concluded in 10:45 mins between Div 4 standout Jormungandr and Imotep 2 on BoE. The longest game featured Team Clutch and the unfortunately now-disbanded Rush Core, who apparently didn’t quite live up to their name, as it took 32:01 mins before anyone rushed a core. But enough about maps, lets see how unfun-to-play (-against) Chromie has actually become thanks to her nerfs. Sure enough, we don’t see her anywhere on that podium up there anymore, where James Eugene Raynor refuses to give up the top spot with an astounding 82 bans in 134 games, which also secures him the top spot in overall popularity with a draft involvement rate of 85.8%. Following some distance behind him are Garrosh Hellscream with 55 bans and the world’s most attractive space goat Yrel with 53.

As everyone likes goat facts, lets interrupt our regular scheduled programming to bring you some goat facts: Apparently you can turn yourself into a space goat in goat simulator. That looks nothing like Yrel though. And it's not an actual fact either. In fact, what did I just google?!?

Chromie and Genji were only beaten by one game, being featured in 52 games without the ability of being selected as a pick.

In the first-phase ban department, Jimmy, Chromie and Yrel are at the top with 78, 49, and 48 bans, respectively. The kings of the second-phase bans are actually supports, with Malfurion, Deckard, and Stukov leading the charts with 22, 18, and 15 bans, despite not showing up anywhere in the top overall. In terms of overall hero picks, the trend we’ve observed last week in Div 5 continues. Main tanks seem to be the focus of drafters in Div 4 as well, with Muradin chalking up 71 overall selections, closely followed by Johanna with 70 picks. Once again, the third-most popular main tank was Diablo, who was played in 55 games. In terms of win rate, we have a significantly more balanced picture, with these three coming in at 53.5%, 51.4%, and 47.3%, respectively, so our favourite Zakarum lady has a much easier time leading her crusade in Div 4, it seems. Let’s look at solo laners next, since they are included in the warrior and assassin plot for technical reasons. Unsurprisingly, Yrel tops the charts with 44 selections, followed by Sonya and Dehaka with 37 games each. However, Dehaka’s adaptation to the Div 4 meta seems to work significantly better than that of his competitors, as his 67.6% win rate shows compared to the 38.6% of Yrel or 48.6% of Sonya. Mighty Sonya can’t really complain though, as stupid horse woman’s (or Lunara’s, if you prefer to call her that) win rate sits at only 30%, making her the clear and undisputed champion of Div 4 Nexomania, just in case anyone had any doubts. 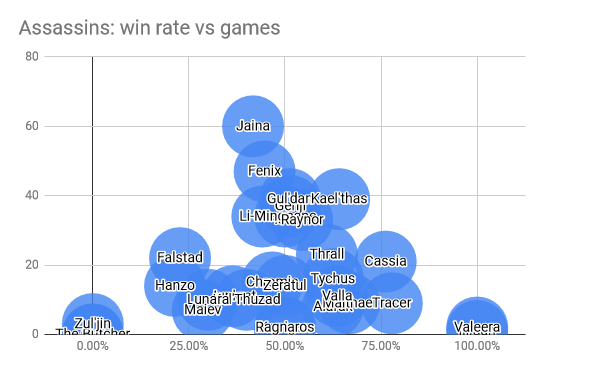 Moving on to the heroes that tend to be out of position, feed, and then proceed to blame their tank or support, aka assassins, we have Jaina once again ice-blocking that top spot with 60 picks. Warping into the second spot is Fenix with 47 selections, and, with my last terrible pun for the article (I promise) we have Gul’dan corrupting third place with a total of 39 games. Still no Hanzo, still no Genji, still no Maiev. Well, maybe we’ll get to see more of these fun and balanced heroes as we move up through the divisions in the coming weeks.

In terms of win rate (of heroes with more than 15 games played), Tracer found her way to the top with 7 wins in 9 games, however, as you can see for yourself, these numbers are not exactly reliable due to the low involvement rate. Cassia takes the next spot with a whopping 76.2% win rate across 21 games. Azmodan (9-for-12) has the same problem as Tracer, although for him the issue is related to his 36 bans, so he doesn’t get a chance to put up better numbers, and Kael’thas follows as the highest win rate “traditional wizardy” mage, winning 64.1% of his 39 games (2 convection games, both won!). Remember sloths, friends don’t let friends spread bombs. 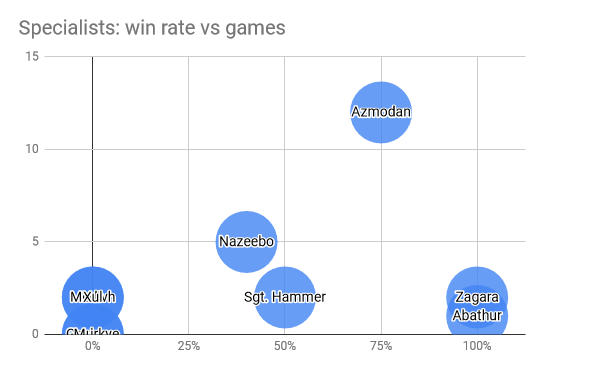 Last but not least, everyone’s favourite friend, the support role, is lead by story-teller turned triangular rooting, staff-whacking juggernaut and Sanctuary potion-tossing world champion Deckard Cain with 52 games. Alexei Stukov is second with 45 selections, followed by Alexstrasza with 40 games thanks to her 17 selections on Infernal Shrines. Deckard Cain also has the highest win rate among the supports with more than 15 games, sitting at a respectable 63.5%. Apparently tossing liquids is very good for your win rate, as Li Li shows up in second place with 60% of her 15 games won, and Malfurion comes in third with 55.6% as the only remaining support with more than half his games won. Seeing these numbers, maybe it’s time for our division 4 drafters to  adjust their ban strategies. Deckard Cain is only the 9th most banned  hero, and Cassia, winning more than 3 out of 4 games, has received one  ban overall throughout the season.

The losers of the hero popularity contest that is HotS middle school are Chen, very surprisingly Cho’Gall (come on Div 4 teams, where is your cheese), Dva, Gazlowe, Murky, Nova, Probius, Samuro, Sylvanas (no cheese in Div 4 allowed at all, huh?), Butcher and the Vikings.

Compared to Div 5, we apparently did get some Illidan (1W-0L), Rexxar (4W-1L), Tyrande (3W-0L), and Xul (0W-2L) games, but overall less heroes (68 out of 80) were played than in Div 5. Let’s see if this development continues throughout the season or if the finest cheese strats are just being kept in store by our Div 4 teams for later use. 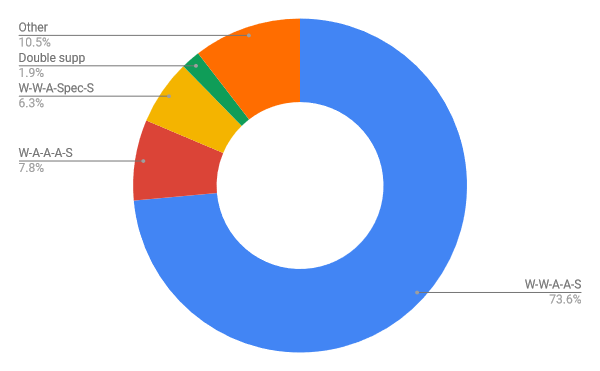 In terms of how all these heroes fit together, we unsurprisingly see the “standard” double warrior, double assassin, support composition at the top of the popularity charts once again. Played 197 out of 268 times in 134 games, it achieved a slightly-less than balanced win rate of 49.7%. Once again, replacing your tanky bruiser solo-lane with a hero from the assassin category like Thrall, Alarak, or even a ranged alternative such as Fenix, was the next best option for many teams and achieved a 52.4% win rate over 21 selections. Swapping out an assassin with a specialist lead to a jump in win rate up to 64.7%, however only 17 teams were brave enough to attempt the step.

Personally, I can’t wait for the role rework to make this section more informative, but we’ve got to go with what we’ve got so far, and from what it seems the adherence to meta compositions in the Lounge is fairly high. I’m pretty sure that if someone was to do this sort of analysis for a month of bronze to plat hero league games, much more entertaining results could be obtained.

As a bonus mention, good old double support comps are doing quite well despite being pretty unpopular, the hypercarry variant with double frontline, double support and one assassin won 2 out of their 3 games while the solo frontline, double support, double assassin variant even went 2-0. These are double hard support compositions and do not include comps with heroes like Medivh (2W-1L), Abathur (1W-0L) or Zarya (3W-0L), however, we’ll get to those if they ever show up as slightly more popular picks. The wait is over! Let’s finally get to the section you all read this blog post for and see how made it to the Div 4 honourable mentions for the mid-season edition. In order to switch it up a bit, I’ve selected slightly different categories for the awards this time around.

The “Div 4’s damage sponge” award goes to DarkWanderer, main tank of On Emerald Wings, who took more than 900k damage across his 9 games, leading the competition by over 130k damage taken.

Giving some recognition to our solo laners that have a hard time showing up to team fights because there’s a huge wave top that needs to be soaked by someone, I’d like to award the “trash cleanup sloth” award to Muis of The Trying Dutchmen, who on average out-soaked his next closest competitor by more than 3k XP per game.

I took a while to decide whether I want to include the top average healing performance because I’m not sure I’ll manage to spell his team name correctly, but Shalltear of team Zchmerglings takes that one home to his cave. Or wherever else it is that Zchmerglings live.

The only player in Div 4 to not yet die over at least 4 played games is Cupcakes Anonymous’ MissyX, which is especially noteworthy since that’s not a support you’re looking at, but a solo laner.

And finally, we have to give our assassin player some credit too. Natman of Keyboard Warriors is the most effective Div 4 team fight damage dealer and Gougin of Jormungandr put up an incredible 115 kill streak over multiple games.

And that’s about it for Division 4, I hope I was able to give you some insight into the meta of that division up to week 4. Look out for more content as the season progresses and we rise through the divisions, as well as some follow-up content on how things develop here in Division 4 later-on in the season. If you're interested in the raw data, you can always contact me or check some of it in the spreadsheet version for this week.

Once again, credits go to ebshimizu and his amazing HotS replay analysis and database software Stats of the Storm, without which this analysis would not have been possible. If you have any questions, comments or criticism, you can reach me on Discord as Llarion#0127!

Aug 24, 2018 Weekly Recap
Part two of two of the Season 7 midway recap is here, peeking into the standings of the Championship Divisions.

Aug 29, 2018 #Rigged
Things are heating up as we head into the last third of the season