We have finally decided to switch over to using Heroes Profile MMR, https://www.heroesprofile.com , since HotSlogs unfortunately lost all their data. This means you should start uploading all your replays to http://hotsapi.net/upload to get an MMR as accurate as possible. This can be done manually via. the webpage or downloading the replay uploader app.

We are using their MMR in a similar way as we previously did with HotSlogs, meaning that we are using both SL and UD mmr but instead of the leaderboard activation required we're going with number of games uploaded. Everything is updated in our ruleset under MMR and Roster Changes and MMR bounds EU & NA. here: https://heroeslounge.gg/general/ruleset

This means that if you've previously had issues with adding players due to no HotSlogs MMR you can PM a mod again to see if you can add the player now.

We are also aware that this is a completely new system to us and we've seeded you initially based on HotsLogs MMR, there will be cases where you individually have a much higher MMR or a much lower MMR and might shift you out from division bounds. We have discussed many different options but decided that this would be the best way to go for now, we will ofc re-evaluate this before our next seasons starts again and see how we can continue make it better

If you have any questions or feedback post in the #feedback_and_suggestions channel or PM a moderator.

Please see below a small part of the analysis done by the Chief League, Pittor when deciding on this new system.

1. HotSlogs had the leaderboard activity system that we have used previously, meaning that you needed to upload X amount of games to be ranked and Y amount of games in the last 30 days or so (this differed between how high ranked you where). We only counted the MMR of those modes that got placed as we deemed them to be more accurate.  Heroes Profile does not have this functionality but instead have number of games played, the issue here is that all historic games are used and we don't know how recent they where played. Right now for Storm League it's not really an issue as it's still a fresh game mode. Hence I have experimented a bit with a cap of amount games played per game mode.

2. It's a completely different MMR system and some players/teams will be punished or rewarded by our change, no matter how we do it.

3. It's hard to find a 1:1 match when deciding how to draw new division boundaries for this season.

In the analysis I used: 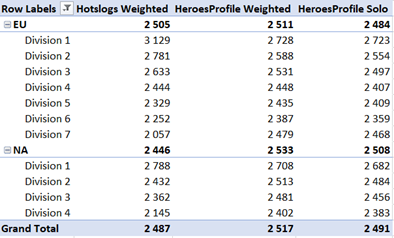 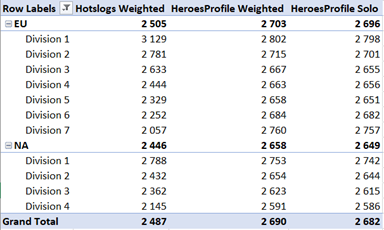 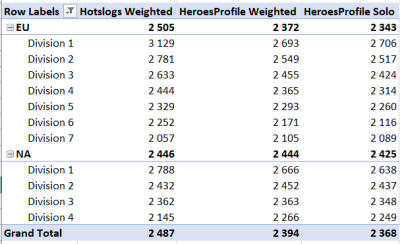 As mentioned earlier in this post if you have any questions or feedback post in the #feedback_and_suggestions channel or PM a moderator in our Discord server.

Oct 06, 2019 Poppinfresh #Rigged Amateur League EU
And so we reach the final week of the regular Heroes Lounge season in EU. Teams will be looking eagerly at the standings in their respective ...