We will be looking at both hero and map popularity in the division taking an evolutionary approach! We want to be able to get a good idea of how the Division 6 meta changes as we move deeper and deeper, as well as how players start to adjust to previous challenges encountered. That being said, let us jump into round 3!

Starting off with tanks, we have the weekly Johanna watch! Yes, Johanna is still going strong. Over round 3 she managed to only drop 2.35% popularity, now sitting at 86.54%, while going up in win-rate by 3.69%, finally going over the 50% mark! Johanna is currently sitting at 51.52% win-rate, finally validating her high popularity!

As for the most banned hero, Diablo has now isolated himself in the front! Diablo has been banned a total of 23 times over these first rounds and saw an increase in popularity of 7.69%, now sitting at 57.69%, a very respectable number. His win-rate though keeps dropping, sitting at a mere 14.29% after dropping 10.71% this week!

Following Diablo we have Anub’arak with 18 bans. This hero saw not only a popularity drop but also win-rate drop this round. He now sits at 69.23% win-rate after dropping 0.77% and 59.62% popularity having dropped 7.05%!

Overall, the tank scene seems pretty stable as it stands with not much variance, so maybe the Division 6 meta is already stabilizing and these numbers will be somewhat constant over the next rounds.

Moving onto off-tanks, Sonya, Varian, Artanis and Rexxar all finally got their first win after some unsuccessful attempts in the previous rounds, Sonya having jumped straight to 50% win-rate due to winning 2 games!

This does mean though, that heroes such as Leoric and Blaze who were previously on top suffered not-so-slight drops in win-rates: 5% and 8.33%, respectively.

When it comes to healers, Ana is, once again, the most popular hero. Despite only 5 bans in round 3 her popularity has gone up by 5.56% having seen play in 8 games total so far, over twice the Ana games on both previous rounds combined! When it comes to win-rate though, she has suffered a 4.17% drop, now standing at 62.5%.

Like stated previously, the Division 6 meta seems to be starting to stabilize and healers are no exception. Following Ana we still have Rehgar and Tyrande, Tyrande having achieved the 50% win-rate mark over a total of 16 games so far, and Rehgar sitting at a very similar position with a slight increase of 3.03%, now sitting at 66.67% win-rate.

As for healers yet to be picked, we have Kharazim, who saw 1 ban so far, Lt. Morales, who saw 4 bans, and Uther, who has yet to even see a ban. Will any of these see no play in Division 6 by the end of the season? Let’s hope not!

Now moving onto assassins, we see Division 6 “heating” up! Despite Jaina still being the most popular mage/assassin, sitting at 67.31% popularity, she is quickly being replaced by some teams in favor of Kael’thas, who now sits at 53.85% popularity! Jaina’s popularity has seen a 4.91% drop while her win-rate has slightly increased by 1.47%, now sitting at 53.85%. However, Kael’thas has seen not only a 9.4% popularity increase, but also a whole 10% win-rate increase! Will Division 6 keep transitioning from Jaina to Kael’thas over the next rounds? Tune in next time for more info regarding this tale of ice and fire!

As for the remaining assassins, Tychus and Zul’jin have gotten their first wins in the season, Tychus having achieved two of them! They currently stand at 40% and 33.33% win-rates, respectively.

Moving onto everyone’s favorite marine meme, we have Raynor! He managed to go up in popularity, now sitting at 44.23% after a 2.56% increase. However, his win-rate has dropped 8.46%, which means he currently has a very underwhelming presence in the division, having won only 30% of games he has seen play in.

And to finish off, we will be having a look at Greymane once again. His popularity is roughly the same, having only seen a 0.64% drop however, his winrate has gone up by 7.5%! Greymane has been such a good boy and maintained a 70% win-rate, so let’s all remember to give him a treat for doing so well.

Similarly to last round, Division 6 only saw 7 matches! This time around, we barely had any matches get a third map, which led to an average 2.28 maps per match. Despite this value being higher than last round’s, it’s still low enough to show how early rounds in swiss tournaments can play out.

The only noteworthy pieces of information regarding maps this round are the fact that Tomb of the Spider Queen has started seeing a lot more bans than usual, doubling it’s previous combined total, increasing it’s popularity by 8.18%, and Garden of Terror still being the only map to not be played, having seen a 12.12% popularity decrease this round.

The Division 6 teams might have noticed that other teams would also like to not play Garden of Terror, which has led to a ban priority shift onto Tomb of the Spider Queen.

And now, Ladies and Gentlesloths, we present you with round 3’s Power Ranking for Division 6! Here are this round’s Top 20 players! 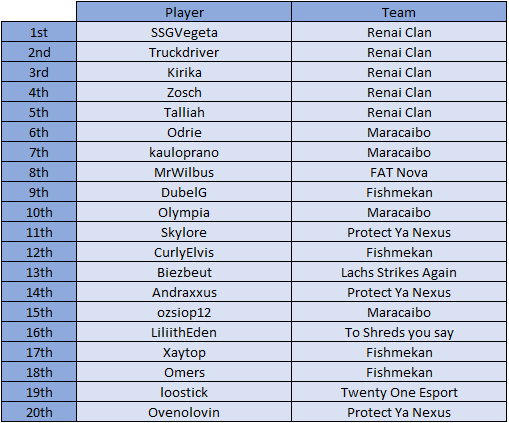 Best round 3 games to watch!

Goats for Hire VS To Shreds you say game 2 on Battlefield of Eternity:

This series has two very close games, but the second one is not only close, but fun to watch! If only we could have had three games of this calibre.

A very close 28 minute game on Volskaya with countless comebacks! In this match you can expect countless brawls over camps, objectives and possibly even over globes, who knows?

Protect Ya Nexus VS Face Check game 2 on Cursed Hollow:

The second game in this best-of-three series had Protect Ya Nexus come right out of the gate with some of their favorite picks, leading to a very uncommon composition which is possibly the most innovative draft in Division 6 as of round 3. Just watch the game and you will not be disappointed!

And now, just to finish off round 3, we would like to give out a few awards! Not regular awards like in the previous rounds though, we will be giving out some Hall of Grief awards!

First of all, we would like to give Protect Ya Nexus the Suprememe Drafters award for their second game’s team composition. These picks are in no way “bad” but, when all together, we have an interesting composition that would be considered weird by many. Well griefed!

Second of all, we would like to give out the MRRGLGL award to minimiki from LOOKINGFORREMPLACANT for having been the first player to pick Murky. And to add to the wound, he won! Really hope to see more of this fishy in the future!

And finally, we would like to give the Zerganophobia award to Twenty One Esport for their fear of Braxis Holdout. They didn't want to have to play on it so much that they decided to ban it, despite not even being part of the map pool! Well griefed to them and to their opponents who didn't even notice.

Inside Division 3 NA: Round 1

Sep 15, 2019 LazyHydra Amateur League NA Weekly Recap
Round 1 of NA has begun, and here we'll be looking to see what's going on inside of Division 3!

Sep 16, 2019 Poppinfresh #Rigged Amateur League EU
The end of season playoffs are in sight, games are starting to heat up as teams realise that winning or losing even a single map can be the ...