We will be looking at both hero and map popularity in the division taking an evolutionary approach! We want to be able to get a good idea of how the Division 6 meta changes as we move deeper and deeper, as well as how players start to adjust to previous challenges encountered. That being said, let us jump into round 2!

Starting off with tanks, we see much of the same with Anub’arak still leading in number of bans, having been banned a total of 14 times so far in the competition. This time though, Diablo has managed to catch up with him, both being the most banned heroes so far in Division 6! Since last time, Anub’arak’s popularity has dropped by roughly 9.52%, yet he has seen a 10% win-rate increase. Diablo on the other hand saw a 2.38% popularity increase and an 8.33% win-rate drop. To the shock of many, a hero has managed to do the impossible this week. Johanna, the highest popularity hero of last week, has managed to actually increase in popularity! It went up by 3.17%, now being at 88.89%, and Johanna's win-rate increased by 1.67%, now being at 47.83% over 23 games!

To finish up tanks, a hero that deserves a mention is E.T.C. due to his impressive 72.73% win-rate over 11 games, having won 8 of them! This equates to a 12.73% win-rate increase since last week which is very impressive! It’s also worth noting that E.T.C has started being used more often as an off-tank hero.

The most popular off-tank pick as of round 2 was Leoric with a 27.78% popularity, having dropped 5.56%, and an impressive 75% win-rate, having increased by 8.33% over 8 games! The only other situation of note is the continuation of Tyrael’s 100% win-rate, now having seen play twice! Congratulations to deep from To Shreds you say!

When it comes to healers, Ana is still uncontested as the top popularity hero. She currently stands at 44.44% popularity having dropped by 7.94%. However, she is no longer at 0% win-rate! Celestina from Bear With Me managed to get two Ana wins in round 2, making her the only Division 6 player to have won with Ana, having done it two times!

As for other healers, Tyrande is no longer the second most popular pick, having seen a popularity drop of 6.75%, having given her spot to a 38.89% popularity Rehgar who got a 5.56% increase this round!

Additionally worth noting is the fact that Deckard Cain, previously 100% win-rate over 2 games, is now standing at 50% win-rate over 4 games. Yes, he lost both of his round 2 matches!

And just to close up healers, we would like to point out that we saw our first Li li game! This game resulted in a win so we would like to congratulate SgtJohnny from CoB Randomly Assembled on this!

And finally, damage dealers! Jaina is still Division 6’s favorite mage with a 72.22% popularity, having seen a 15.08% increase which is very impressive! What isn’t though is her win-rate drop of 7.62% giving her a current value of 52.38%! The second favorite mage is no longer Gul’dan, who saw a 0.79% popularity increase, but Kael’thas instead! Kael’thas has seen a 15.87% popularity increase, now standing at 44.44%! His win-rate though has suffered a 10% drop, now standing at 40% over 7 games, having been banned a total of 7 times as well!

A new hero to have seen play was Lunara who had 2 games end up in wins, having been played by Melfie from LOOKINGFORREMPLACANT twice this round! Very well done!

To close out the assassin overview and Hero Stats section, we would like to look at Greymane, the hero that we considered the most effective in round 1! From a 100% win-rate over 4 games, he has transitioned to a 62.5% win-rate over 8 games, having won only 1 of his 4 round 2 games!

In round 2, we (surprisingly) only had 7 matchups due to having a tie (Fishmekan vs Good Grief!) and the BYE win from Lachs Strikes Again. We had a lot more one-sided games or, better said, more 2-0 victories than in round 1. The average maps played per best-of-three series was 2.1 maps. The average maps played through rounds 1 and 2 is 2.4 maps so it seems like we still have a fair number of matches that go over the full distance.

Since six less maps were played compared to round 1, almost every map dropped in terms of general popularity, except for three. These three “winners” of round 2 were Sky temple with a popularity increase of 11.66%, now sitting at 86.66% total popularity (funnily enough, it has only been played once and banned out 12 times, more than any other map); Battlefield of Eternity with an increase of 5% in popularity, sitting at 80% popularity overall; and Infernal Shrines, having jumped from 50% popularity to 60% popularity (7 games played and 2 times banned).

Every map is sitting at least at 50% popularity except Towers of Doom and Dragon Shire, having dropped from 50% to 46.66%. That’s everything worth noting this round when it comes to maps, so let’s see how it develops next week!

And now, Ladies and Gentlesloths, we present you with round 2’s Power Ranking for Division 6! Here are this round’s Top 20 players! 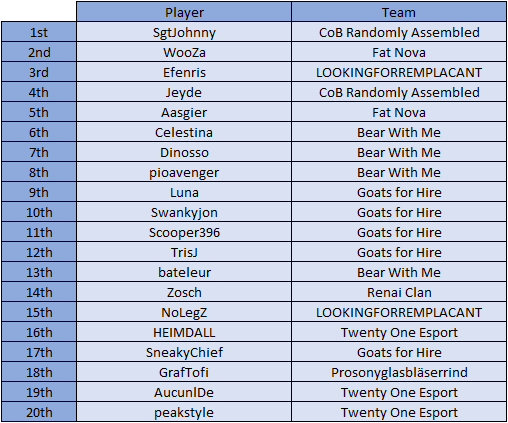 Best round 2 games to watch!

FAT Nova VS Protect Ya Nexus game 2 on Infernal Shrines:

Maracaibo VS Twenty One Esport game 2 on Cursed Hollow:

After a close first game, Twenty One Esport really need to win this map to have any chances! Do you love seeing bomb being spread? What about pyroblasts? If so, then this game is the right one for you!

After game 1’s massacre, Operation Petticoat decided to take a massacre of their own into the game, planning to decimate! No, these aren’t just expressions. This game features not only a Malthael and a Garrosh, but also a Nazeebo, bundled up for 19-ish minutes of fun!

And now just to finish off round 2, we would like to give out a few awards!

The MVP of round 2 is SgtJohnny from CoB Randomly Assembled who pulled off out of the box picks (Lucio and Li li) and showed Division 6 that Lucio and Li li are broken heroes. Good games and well played to SgtJohnny and congratulations for getting our round 2 MVP!

The second award we are giving is the UNDERTAKER! This award goes to HEIMDALL from Twenty One Esport for getting 40 takedowns and 100% kill participation this round! Very well done and congratulations on getting such a rare (made up) award!

Sep 01, 2019 Grier Amateur League EU Weekly Recap
With all round four matches completed, let’s take a look at how things are standing in EU Division 5 of Heroes Lounge.

Sep 10, 2019 Grier Amateur League EU Weekly Recap
With all round five matches completed, let’s take a look at how things are standing in EU Division 5 of Heroes Lounge.