We will be looking at both hero and map popularity in the division taking an evolutionary approach! We want to be able to get a good idea of how the Division 6 meta changes as we move deeper and deeper, as well as how players start to adjust to previous challenges encountered. That being said, let us jump into round 4!

As we start off with tanks, the crusade marches on! With slight bumps in the road… Despite Johanna still being the most popular hero, standing at 81.43% popularity, she has seen both her popularity and win-rate drop this week by 5.11% and 6.06%, respectively. Due to this, her win-rate has also returned to being under 50%, being 45.45% over 44 games!

As for bans, a tank is no longer the hero with the most bans! We do have a tank with the second highest ban count though: Garrosh! Last week, Diablo isolated himself as the top banned tank and hero overall. This week however, both Garrosh and Kael’thas have surpassed him, heavily!

Just like stated last week, the tank scene seems pretty stable excluding our humble crusader’s drop in win-rate and popularity and the terror that is Diablo, finally awakening from his slumber. Diablo saw a 24.18% win-rate increase, now putting him at a solid 38.46% win-rate! It’s still not the most impressive value, but it’s over double his previous value!

Moving onto off-tanks, we keep seeing more of the same. Popularity variations below 3% are a pretty clear indication of a stable and defined meta that is generally followed by everyone in the Division. As for win-rates, we see heroes with less games suffer variation around 16% due to their low amount of games, despite it being due to only one game.

The only case worth noting is Imperius who managed to get his first win this season in Division 6! Congratulations to HEIMDALL from Twenty One Esport!

When it comes to healers, much like in the previous weeks the meta is also stabilizing, not having much worth noting.

Ana is still the most popular healer sitting at 44.29% popularity, having dropped 5.71%, and 54.55% win-rate, having dropped 7.95%. That being said though, Tyrande is actually the most played healer, having seen play in 22 games so far, closely followed by both Anduin and Rehgar at 19 games played!

On another note, I think Eef might have read last week’s blog post, because Brightwing saw play again in round 4. Despite winning and losing a match, a win was gotten at least. That’s a good start!

To finish off healers, we would like to announce that Uther has seen play! Uther was played by Raasta from Face Check and achieved a win in his first match. Congratulations Raasta and Face Check on that map win!

Now moving onto assassins, we bring you the next instalment in the Ice and Fire saga that started last week! Jaina’s win-rate dropped by 5.36%, placing her below the 50% mark, now at 48.48%, while Kael’thas saw no change in win-rate whatsoever. In terms of popularity though, we keep seeing Jaina drop (1.59% this week) as Kael’thas climbs! Kael’thas is currently the most banned hero overall, standing at 31 bans and a popularity score of 58.57%! Who do you think will be the reigning mage by the end of the season? You are free to spam tag us on discord with your predictions if you so desire!

Now speaking of another KT, we have Kel’thuzad! It took him four rounds and being played three times, but he finally achieved a win! Congratulations to Xiph and Good Grief! on achieving this!

On another note, Alarak is currently reigning high at 87.5% win-rate over 8 games, having been banned 13 times overall (30% popularity). Knowing this, will more teams start prioritizing Alarak bans? We saw a 7.5% win-rate increase this week and a 6.92% popularity increase, so further banning might be needed to keep the highlord in check.

As for the remaining assassins, the meta seems to be stabilizing more and more, with Greymane being an exception, having dropped 8.46% win-rate, now being forced to sit at 61.54%. Sit! Down, boy!

And to close out assassins and the hero stats, let’s just have a quick look at Raynor. He managed to raise his win-rate by 6% this round, now standing at 36%, almost as high as Gul’dan’s 36.36%! Which of these will be the lowest win-rate hero of the most played assassins? Anyone can win this grief race!

Hello, Map stat lovers! We are finally at your favorite part of our Division 6 blog post. Let's start with the hard facts: In round 4 we had 2.25 average maps played per series. That being said, we are slowly getting a more stable value since we are moving closer to Season 10’s halfway point.

Following them, we have Tomb of the Spider Queen and, surprisingly, Alterac Pass, which is one of the newer maps in the Heroes Lounge map pool. Fun Fact: these two maps were the only two to get a popularity increase (of 1.82%) in the top 5 most popular maps, now standing at 70% popularity!

We would also like to point out as part of a Public Service Announcement that Braxis Holdout is not part of the map pool, so please stop banning it. I’m looking at you, Twenty One Esport!

And now, Ladies and Gentlesloths, we present you with round 4’s Power Ranking for Division 6! Here are this round’s Top 20 players! 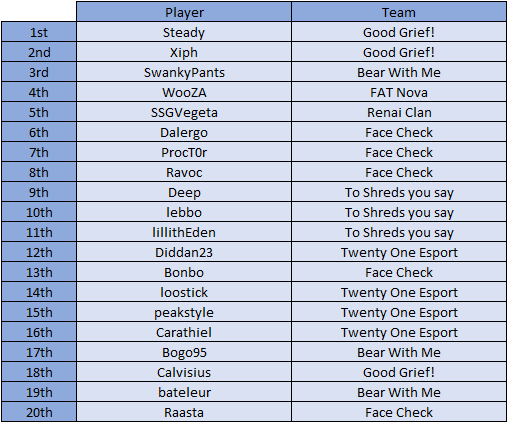 Best round 4 games to watch!

Goats for Hire VS LOOKINGFORREMPLACANT game 3 on Alterac Pass:

This game is not here just because it’s the game that seals off a reverse sweep, no. This game is here because there is both a Nova and Nazeebo on the same side of the map! Watch this game of grief and enjoy!

Fishmekan VS FAT Nova game 2 on Tomb of the Spider Queen:

The game that decided whether Fishmekan were making it to a third game, and they decided to draft a Medivh! Let’s see how a Division 6 Medivh can help out his team!

Just your typical Volskaya Foundry game: practically 31 minutes of a close brawl for everything! Overall a very close series that does not get enough respect from a 2-0 score but still worth a watch!

And now, just to finish off round 4, we would like to give out a few awards!

Our MVP Award is going to Steady from Good Grief! who played an excellent Anduin in both games, managing to keep our friendly lounge Petman alive more often than not. Overall a very impressive performance by them which deserves huge congratulations!

Our second and last award today, because you shouldn’t spoil sloths too much, is the “Because our Glorious Leader wasn’t home yet” award and it’s going to Goats for Hire for being able to pull off the Reverse Sweep against LOOKINGFORREMPLACANT, as they said in an official statement. Congratulations to Goats for Hire for having so much trust into their Leader.

Sep 22, 2019 Drakvor Amateur League EU Weekly Recap
Last week, we explored the top twelve teams in Division 7, and went over their next two matches and the significance of some of these match ...

Inside Division 3 NA: Round 2

Sep 29, 2019 LazyHydra Amateur League NA Weekly Recap
Round 2 has been played in North America, so here's a recap of what's gone down in Division 3!